The Aleppo Codex: In Pursuit of One of the World’s Most Coveted, Sacred, and Mysterious Books (Paperback) 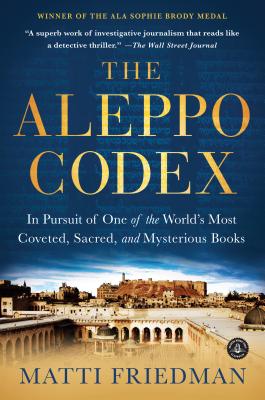 “A brilliant non-fiction thriller about an ancient copy of the Torah. Highly recommended.”
—Paulo Coelho, author of The Alchemist

Winner of the 2014 Sami Rohr Prize for Jewish Literature

A thousand years ago, the most perfect copy of the Hebrew Bible was written. It was kept safe through one upheaval after another in the Middle East, and by the 1940s it was housed in a dark grotto in Aleppo, Syria, and had become known around the world as the Aleppo Codex.

Journalist Matti Friedman’s true-life detective story traces how this precious manuscript was smuggled from its hiding place in Syria into the newly founded state of Israel and how and why many of its most sacred and valuable pages went missing. It’s a tale that involves grizzled secret agents, pious clergymen, shrewd antiquities collectors, and highly placed national figures who, as it turns out, would do anything to get their hands on an ancient, decaying book. What it reveals are uncomfortable truths about greed, state cover-ups, and the fascinating role of historical treasures in creating a national identity.

Matti Friedman’s 2016 book Pumpkinflowers was chosen as a New York Times Notable Book and as one of Amazon’s 10 Best Books of the Year. It was selected as one of the year’s best by Booklist, Mother Jones, Foreign Affairs, the National Post, and the Globe and Mail. His first book, The Aleppo Codex, won the 2014 Sami Rohr Prize and the American Library Association’s Sophie Brody Medal. A contributor to the New York Times’ opinion page, Friedman has reported from Israel, Lebanon, Morocco, Moscow, the Caucasus, and Washington, DC, and his writing has appeared in publications such as the Wall Street Journal, the Atlantic, and the Washington Post. Friedman grew up in Toronto and now lives with his family in Jerusalem.

One of Booklist’s Top 10 Religion and Spirituality Books

“[A] brilliant non-fiction thriller about an ancient copy of the Torah. Highly recommended.”
—Paulo Coelho,author of The Alchemist

“Weaving a millennium of Arab Jewish history with several versions of how the codex came to Israel, Friedman details a mystery story full of ambiguity and obfuscation, particularly by certain individuals connected to the Ben-Zvi Institute in Jerusalem. Think of this book as a real-life version of Umberto Eco’s The Name of the Rose.”
—Jewish Herald-Voice

“The story of the Aleppo Codex’s survival, which Friedman recounts in almost cinematic detail, is as unlikely as it is astonishing . . . Friedman’s writing shines most when he resurrects a time and a place now vanished . . . We read The Aleppo Codex expecting to be educated about a book lost, but we are captivated by a world lost instead.”—Haaretz

“Stirring . . . Friedman rightly sees the Codex as a valuable document and does diligent research to learn what happened to it, especially to the missing pages. What and how he discovers reads like an intriguing mystery story that rivets the attention of readers who become eager to learn the outcome . . . He has ably brought to our attention a little-known episode in Jewish history that is eminently worth of our high regard.”
—The Jewish Post & Opinion

“An incredible story that involves greed, subterfuge, state cover-ups, and the fascinating role of the ancient Hebrew Bible manuscript, the Aleppo Codex, in creating a national identity.”
—Utne Reader

“Three cheers for Matti Friedman, . . . who in his first book got his teeth into a terrific story and investigated and reported it as thoroughly as possible . . . A highly readable, deeply engaging, balanced and nuanced pursuit of the facts . . . Friedman does an exemplary job of hacking his way through the various thickets that surround the Aleppo Codex.”
—The Jerusalem Report

“The Aleppo Codex is one of the books that is a struggle to classify. It is a great thriller, a fascinating piece of history, a captivating human drama and a beautiful study of religion and politics which will appeal to atheists and the apolitical alike.” —Australian Broadcasting Corporation, Brisbane

“Friedman tell his story in a knowledgeable succession of centuries, of scenarios, of human figures . . . Friedman follows the trail of the [Codex] pages like a bloodhound.”
—La Stampa (Italy)

“Friedman creates a riveting story, one that the reader will have a hard time putting down.”
—The Advocate

“An engrossing read if you like history or mystery—both are in abundance here.”
—A Garden Carried in the Pocket

“Friedman’s painstaking investigation of just what happened to the Aleppo codex—and when—is a fascinating account of the role of sacred relics in creating a national identity, and also of the lure of old and treasured objects.”
—Maclean’s

“A superb work of investigative journalism that reads like a detective thriller.”
—The Wall Street Journal

“With a journalist’s nose for truth and a writer’s passion for eloquence, Friedman

“A superb work of investigative journalism that reads like a detective thriller.”—The Wall Street Journal

“A thrilling, step-by-step quest to discover what really happened to Judaism’s most important book . . . Many of [The Aleppo Codex’s] most astute and well-earned revelations are also its biggest surprises.” —The Boston Globe

“The Aleppo Codex builds to a moral crescendo more impressive than the climactic fight scene in any thriller.”—Salon

“Friedman creates a riveting story, one that the reader will have a hard time putting down.”—The Advocate

“Thrilling . . . a real-life National Treasure that reads like fantastical fiction.”—CultureMob

“[Friedman] opened a treasure box of history, mystery, conspiracy, and convolutions that would do any biblical thriller proud . . . Friedman has done a remarkable job—finding sources and digging through archives—of getting the Crown’s fascinating story out of the shadows and into the light. In the process, he’s become the latest in the long line of the Crown’s protectors.”—Booklist, starred review

“Friedman’s account of how the Codex was taken from Syria in the 1940s, later to resurface in Jerusalem, although no longer