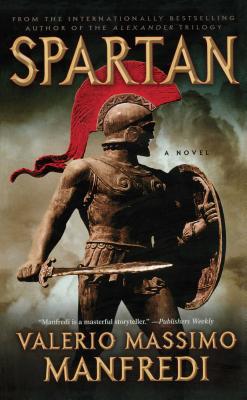 According to Herodotus, not all of the three hundred Spartan warriors perished during the Battle of Thermopylae: Two were spared. Spartan is their story.

This is the epic tale of a noble Spartan family shattered by the law of the land, which forces them to abandon one of their two sons -- Talos, who was born crippled -- to the elements. Brithos, the strong and healthy son, is raised in the caste of the warriors, while Talos is saved by a Helot shepherd and raised among peasants. They live out their story in a world dominated by the brutal, relentless clash between the Persian empire and the city-states of Greece -- until the voice of their blood and of human solidarity unites them in a thrilling, singular enterprise.

Full of passion, courage and magic, Spartan is an enthralling novel of the ancient world.

Dr. Valerio Massimo Manfredi is an Italian historian, archaeologist, and journalist. The professor of archaeology in the "Luigi Bocconi" University in Milan and a familiar face on European television, he has published a number of scientific articles and essays as well as thirteen novels, including the Alexander trilogy and The Last Legion. Alexander was published in thirty-six languages in fifty-five countries and was sold for a major film production in the U.S., and The Last Legion is soon to be a major motion picture starring Colin Firth and Ben Kingsley. Dr. Manfredi is married with two children and lives in a small town near Bologna.

"An intelligent, knowledgeable and entertaining story, as much an education as an entertainment."

"Manfredi is a masterful storyteller."