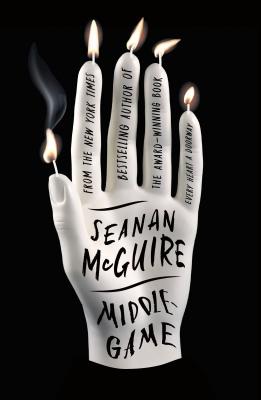 WINNER OF THE LOCUS AWARD FOR BEST FANTASY NOVEL, 2020!

Meet Roger. Skilled with words, languages come easily to him. He instinctively understands how the world works through the power of story.

Meet Dodger, his twin. Numbers are her world, her obsession, her everything. All she understands, she does so through the power of math.

Meet Reed, skilled in the alchemical arts like his progenitor before him. Reed created Dodger and her brother. He’s not their father. Not quite. But he has a plan: to raise the twins to the highest power, to ascend with them and claim their authority as his own.


A USA Today Bestseller, and named as one of Paste Magazine's 30 Best Fantasy Novels of the Decade!

SEANAN McGUIRE is the author of the October Daye urban fantasy series, the InCryptid series, and other works. She also writes darker fiction as Mira Grant.

Seanan lives in Seattle with her cats, a vast collection of creepy dolls and horror movies, and sufficient books to qualify her as a fire hazard.

She was the winner of the 2010 John W. Campbell Award for Best New Writer, and in 2013 she became the first person ever to appear five times on the same Hugo ballot.

"McGuire has an uncanny knack for taking the worst things that lurk in the shadows and weaving them into an absolute delight."—Becky Chambers

"Roger and Dodger are the heart of this story. They're its pulse and purpose — these two supernaturally gifted kids who come off like kids. And this is the greatest trick McGuire pulls here … It's the kind of book where you want to reach into the page just to help them out, to warn them of what's coming. It blossoms."—NPR

"This is a fascinating novel by an author of consummate skill."—Publishers Weekly, starred review

"McGuire sets a high bar for alchemy-based stories in this new stand-alone, twisting themes of time and space as seen through the eyes of children. . . . This singular work keeps readers thinking long after the final page."—Library Journal, starred review

"An excellent recommendation for those who enjoyed Lev Grossman's The Magicians and Lauren Oliver's Replica."—School Library Journal, starred review

“[A]n ambitious piece of world building from a master of the craft . . . thoroughly engaging.”—Booklist

"Readers should come for the tightly constructed world and stay for the pleasure of watching the twins choose each other, come what may."—Shelf Awareness

"This is a tricky book to pull off, no doubt about it. But that trickery is pulled off with the kind of aplomb that has become one of McGuire’s great skills. What a story to read (and re-read). If you’ve got a love for fantasy, you should read Middlegame."—Entertainment Weekly's Cultures

"An excellent recommendation for those who enjoyed Lev Grossman's The Magicians and Lauren Oliver's Replica."—School Library Journal

"Readers should come for the tightly constructed world and stay for the pleasure of watching the twins choose each other, come what may."—Shelf Awareness