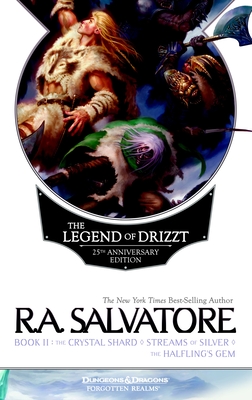 A demonic artifact, hurled by an angel through the spaces between planes of existence to keep it out of the hands of a demon prince, has found its way to Faerûn. There it corrupts a young wizard, turning him into a power-mad invader. Only a small band of heroes, including the exiled dark elf Drizzt Do’Urden can stand in his way—and stir up a long list of enemies in the process.

The Legend of Drizzt® 25th Anniversary Edition, Book II collects the fourth, fifth, and sixth novels in this best-selling series: The Crystal Shard, Streams of Silver, and The Halfling’s Gem in a trade paperback edition that is a great value for anyone who’s ready to continue the experience of the Legend of Drizzt.

R.A. Salvatore is the New York Times best-selling author of more than forty novels, including the popular Forgotten Realms series The Legend of Drizzt. He's an avid gamer, father of three, and loyal citizen of Red Sox Nation. Residence: Massachusetts