The Eagle's Prophecy: A Novel of the Roman Army (Eagle Series #6) (Paperback) 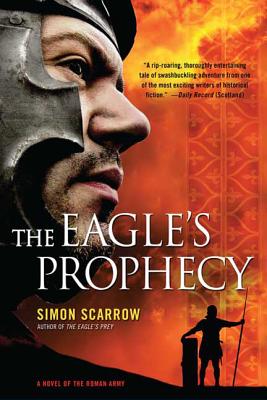 It is spring A.D. 45 in Rome, and Centurions Macro and Cato, dismissed from the Second Legion in Britain, are waiting for an investigation into their involvement in the death of a fellow officer. It is then that the imperial secretary, the devious Narcissus, makes them an offer they can't refuse: to rescue an imperial agent who has been captured by pirates operating off the Illyrian coast. With him were scrolls vital to the safety of the emperor and the future of Rome.

But Narcissus also sends Vitellius, an old enemy of the two centurions. The three officers set out from Ravenna with the imperial fleet but the pirates are forewarned and the Romans pay a heavy price. Outnumbered by the enemy, surrounded by rumors of treachery, and endangered by Vitellius's desire to redeem himself, Centurions Macro and Cato must find the pirate base to avert a disaster that could destroy the emperor and the very core of Rome.

"[A] rip-roaring, thoroughly entertaining tale of swashbuckling adventure from one of the most exciting writers of historical fiction."---Scottish Daily Record

Simon Scarrow teaches at City College in Norwich, England. He has in the past run a Roman history program, taking parties of students to a number of ruins and museums across Britain. He lives in Norfolk, England, and writes novels featuring Macro and Cato. His books include Under the Eagle and The Eagle's Conquest.

“A rip-roaring, thoroughly entertaining tale of swashbuckling adventure from one of the most exciting writers of historical fiction.” —Daily Record (Scotland)

“Scarrow manages to summon up all the glory and the gore that characterized life in the Roman legions. Outstanding military history from a relatively new master of the genre.” —Booklist