Home » Events at Main Street Books
Back to top 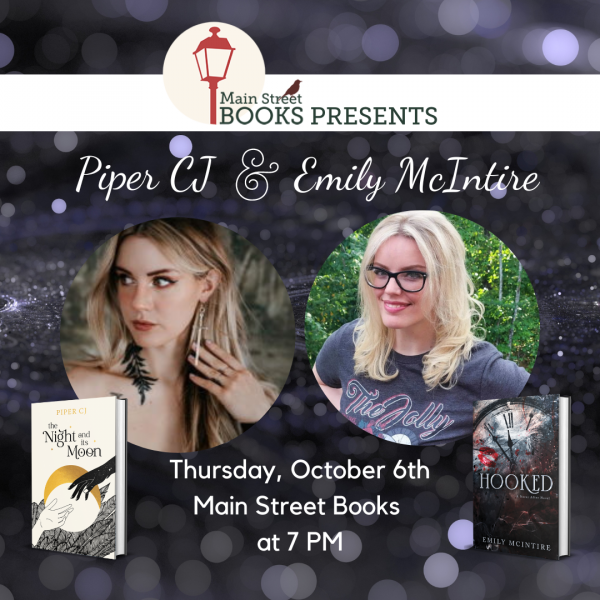 Join us for an evening with two of the most exciting talents in the romance genre- Piper CJ and Emily McIntire!

We'll have snacks and sips and thrilling, romantic stories from Piper and Emily, as well as a book signing for their newest titles, THE NIGHT AND ITS MOON and HOOKED.

We'd love to see you there!

About THE NIGHT AND ITS MOON:

An addictive fantasy romance from TikTok sensation Piper CJ, now newly revised and edited. Two orphans grow into powerful young women as they face countless threats to find their way back to each other.

Farleigh is just an orphanage. At least, that's what the church would have the people believe, but beautiful orphans Nox and fae-touched Amaris know better. They are commodities for sale, available for purchase by the highest bidder. So when the madame of a notorious brothel in a far-off city offers a king's ransom to purchase Amaris, Nox ends up taking her place -- while Amaris is drawn away to the mountains, home of mysterious assassins.

Even as they take up new lives and identities, Nox and Amaris never forget one thing: they will stop at nothing to reunite. But the threat of war looms overhead, and the two are inevitably swept into a conflict between human and fae, magic and mundane. With strange new alliances, untested powers, and a bond that neither time nor distance could possibly break, the fate of the realms lies in the hands of two orphans -- and the love they hold for each other.

James has always had one agenda: destroy his enemy, Peter Michaels. When Peter's twenty-year-old daughter Wendy shows up in James's bar, he sees his way in. Seduce the girl and use her for his revenge. It's the perfect plan, until things in James's organization begin to crumble. Suddenly, he has to find the traitor in his midst, and his plan for revenge gets murkier as James starts to see Wendy as more than just a pawn in his game.

Wendy has been cloistered away most of her life by her wealthy cold father, but a spontaneous night out with friends turns into an intense and addictive love affair with the dark and brooding James. As much as she knows James is dangerous, Wendy can't seem to shake her desire for him. But as their relationship grows more heated and she learns more about the world he moves in, she finds herself unsure if she's falling for the man known as James or the monster known as Hook.

The Night and Its Moon (Paperback)