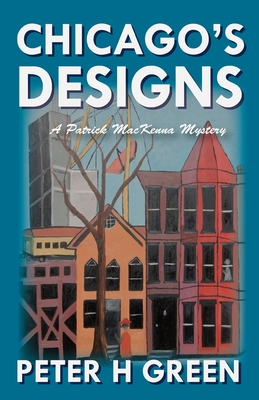 If Patrick had been born in Chicago, he might have known better than to date a gangster's daughter... --Chicago 's Designs, a prequel to the Patrick MacKenna architectural mystery series

Patrick MacKenna, young architect, amateur sleuth and suitor of the beautiful Gloria Bohannon has it made. But when he accepts the design challenge of a new casino and resort project for Gloria's father, malapropic Mob boss "Chicago Joe" Bohannon, conflicts quickly complicate his promising career. He spots a fedora-topped man on a window washer's scaffold and stumbles on a murder case, which police think is mob-related, and becomes a suspect.

Meanwhile he falls helplessly for Kitty, a brainy waitress his father has brought over from Ireland to work and sing in his family's Irish pub. But a chance encounter with Gloria and her ex-stripper mother as he tours Kitty through the Art Institute reveals his duplicity and sets off a chain of events he can't control. Although Patrick has let down his client's daughter, he must find a way to finish the project, help law enforcement solve the crime and clear his name.

In this dark crime thriller, set in rough-and-tumble Chicago at the turn of the millennium, Patrick must face the age-old challenges of the FBI against the mob, self-interest vs. honor and marriage of convenience versus love. He must make the hard choices among these opposites which will determine the course, the quality and the length of his life.