The Devourer Below: An Arkham Horror Anthology (Paperback) 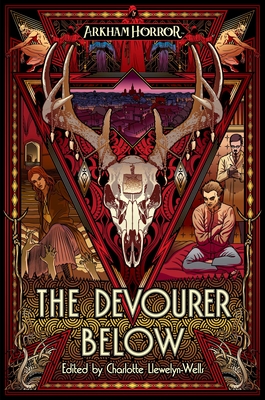 The city of Arkham falls prey to ghoulish dread in this chilling anthology of action-packed adventure, from the bestselling world of Arkham Horror

Something monstrous has come to Arkham, Massachusetts. There have always been shadows here, but now a new hunger has risen from the depths and threatens those who dwell here. But there are heroes too – people who stand up and fight to stem the tide, even when it costs them everything. Explore eight shocking new tales of occult horror, captivating mystery, and existential fear – from a zealous new heroine to conniving cultists, bootleg whiskey to night terrors, and fiends that crawl from open graves. A nightmare has fallen across Arkham, and it will devour all.

CHARLOTTE LLEWELYN-WELLS is a bibliophile who took a wrong turn in the wardrobe and ended up as an editor – luckily it was the best choice she ever made. She’s a geek and fangirl with an addiction to unicorns, ice hockey and ice cream.

Josh Reynolds is the author of over thirty novels and numerous short stories, including the wildly popular Warhammer: Age of Sigmar and Warhammer 40,000. He grew up in South Carolina and now lives in Sheffield, UK.

By day, EVAN DICKEN studies old Japanese maps and crunches numbers for all manner of fascinating research at Ohio State University. By night, he does neither of these things. His prolific short fiction has most recently appeared in Analog, Beneath Ceaseless Skies, and Strange Horizons, with more coming soon from Black Library and Rampant Loon Press.

DAVIDE MANA was born and raised in Turin, Italy, with brief stints in London, Bonn and Urbino, where he studied paleontology (with a specialization in marine plankton) and geology. He currently lives in the wine hills of southern Piedmont, where he is a writer, translator and game designer. In his spare time, he cooks and listens to music, photographs the local feral cats, and collects old books. He co-hosts a podcast about horror movies, called Paura & Delirio.

GEORGINA KAMSIKA is a speculative fiction writer born in Yorkshire, England, to Anglo-Indian immigrant parents and has spent most of her life explaining her English first name, Polish surname and South Asian features. Georgina is a graduate of the Clarion West Writers Workshop where her first novel, Goddess of the North, started life as a short story.

THOMAS PARROTT grew up reading science fiction and fantasy from a very young age. This was only compounded by the discovery of video games and tabletop roleplaying. This has led to a life of dealing with the mundane while dreaming of dragons. He has written Isha’s Lament, The Test of Faith, and Loyal to the End, all for the Warhammer 40,000 setting, as well as short fiction for Arkham Horror and KeyForge anthologies. He lives in Georgia.

David Annadale is a lecturer at a Canadian university on subjects ranging from English literature to horror films and video games. He is the author of many novels in the New York Times-bestselling Horus Heresy and Warhammer 40,000 universe, and a co-host of the Hugo Award-nominated podcast Skiffy and Fanty.

Cath Lauria is a Colorado girl who loves snow and sunshine. She is a prolific author of science fiction, fantasy, suspense and romance fiction, and has a vast collection of beautiful edged weapons.

"As always with Aconyte’s impressive (and ever-growing) range, it also finds a satisfying balance between being detailed enough for existing fans of this IP and accessible enough for readers taking their first steps into Arkham Horror fiction. All told it’s fun, suitably creepy, wonderfully varied and consistently entertaining. What more could we ask for?"
— Track of Words

"Not only are each of the stories engaging, atmospheric and deeply compelling slices of Jazz Age horror fiction by themselves, but editor Charlotte Llewelyn-Wells has ensured that every tale progresses the overarching narrative of the horrifying activities and occult plots of the Cult of Umôrdhoth, developing a cohesive and chilling meta-narrative that comes to an action-packed and quietly unsettling conclusion. "
— Sci-Fi and Fantasy Reviewer

"I've really enjoyed the Arkham Horror novels I've read, and have found them to be some incredibly creepy and compelling horror mystery stories, so I'm absolutely over the moon to see these tales work so well in short story form too, and I'm excited to see more anthology books like this."
— Trans-Scribe

"All eight stories in this collection are strong reads and have done a great job of tiding me over until I have the chance to pick up more full length novels and further familiarize me with the universe of the series.  I can't wait to read more from this series and maybe even try the board game."
— Never Anyone Else

"An entertaining horror anthology with plenty of chills."
— Muse Books