Attack From the '80s (Hardcover) 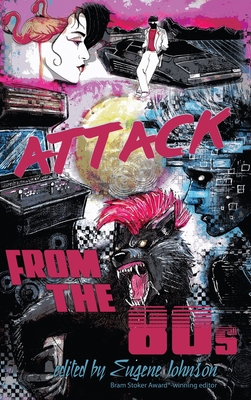 By Eugene Johnson (Editor)
This book is unavailable to order.

Modern technology has brought some new twists and turns to horror. Found footage, cell phone-based viruses, literal ghosts in the machines but maybe it's time for a throwback. It's time for some new tales of slumber party horrors, VCR monsters, and problems that can't be solved with a smart phone. We want tales of unstoppable monsters, sewer-dwelling creatures, looming threats of cold-war chaos. Give us fear under the neon lights of an arcade, people fighting for their lives against the backdrop of a hot city night and a cheesy sax solo. Take us back to a time when latchkey kids had to fend for themselves and the only thing left to stop an unspeakable horror was a plucky band of high school kids. Make it bloody. Make it gnarly. Make it 80s

"Reading Attack from the '80s brings on a nostalgia tinged with blood. It's like being impaled on a time machine and dragged through sickly houses haunted by serial killers, spooky fairgrounds where kids vanish, woodlands stalked by unnameable beasts ... and it is wonderful. I'm in my teens again, and the horrors are more terrifying than ever." -Tim Lebbon, author of Eden

"Attack from the '80s sends us rollicking back into the pop culture madness of that genre, and does it with creeps, fun, and great storytelling from today's top horror writers " -Jonathan Maberry, NY Times bestselling author of Ink and Rot & Ruin

"Deliriously, deliciously gruesome, Attack from the '80s is a treat for horror fans looking for the hard stuff. An all-star lineup of writers inspired by that gnarliest of decades. Rad " -David Wellington, Marvel Zombies, Monster Island

"Over twenty tales thrown back into an era where horror bled out of every corner of the literary universe, ATTACK FROM THE 80s culls some of the best writers today, many of whom suffered through the decade to carve deep into the psyche. From subtle to all out gore and glam, this anthology rocks harder than boomboxes, MTV, and hair-metal Do not miss it." -Dave Simms, Cemetery Dance

Top Guns of the Frontier by Weston Ochse

The Devil in the Details by Ben Monroe

Return of the Reanimated Nightmare by Linda Addison

Your Picture Here by John Skipp

Munchies by Lucy A. Snyder

Epoch, Rewound by Vince A. Liaguno

The White Room by Rena Mason

When He Was Fab by F. Paul Wilson

Welcome to Hell by Christina Sng

Perspective: Journal of a 1980s Mad Man by Mort Castle

The Garden of Dr. Moreau by Lisa Morton