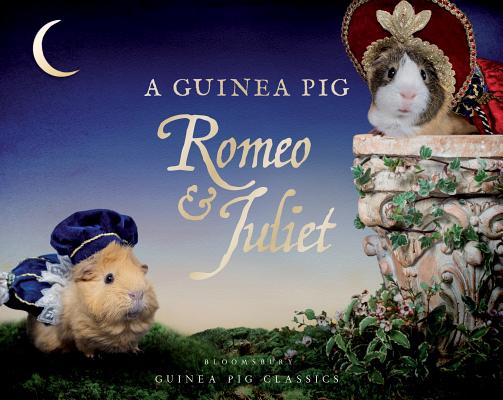 A charming retelling of Shakespeare's beloved tragedy, brought to you by the cuddly stars of A Guinea Pig Pride & Prejudice.

When Romeo and Juliet meet in a crowded ballroom, they don't realize that their families are sworn enemies. Later that night, Romeo overhears Juliet declaring her love for him from her balcony, and the two hatch a plan to marry and escape. But their great romance is ruined by the family rivalry, which tears them apart and leads to their tragic demise.

Portrayed with great heart by a darling cast of guinea pigs in adorable period costumes, A Guinea Pig Romeo & Juliet is Shakespeare as you've never seen him before.

William Shakespeare (1564-1616) was an English dramatist, poet, and actor, generally regarded as the greatest playwright of all time.

Tess Newall is a set designer who specialises in fashion shoots and decorative painting. She carefully stitched and painted each tiny detail in A Guinea Pig Night Before Christmas, creating a small but perfectly formed vision of Christmas Eve in a guinea pigs's home.

"Like a comfortable armchair upon which you might read one of these tiny masterpieces, the success of the series--and let there be no doubt that it is a triumph--rests on four points: the iconic but charming literature upon which each book is based; the unwavering cuteness of the guinea pigs; the delightful styling of each photograph with costumes by Newall; the sparse brevity of Goodwin's adaptations that preserve the essence, the aesthetic, and the language of the original." - Los Angeles Review of Books

"A sweet take on Shakespeare's tragic love story . . . Fully illustrated with guinea pigs in costumes worthy of The Globe Theatre in London, this book is definitely not one to miss." - BookTrib

"We thought Pride & Prejudice couldn't get much better--then we saw lines from Jane Austen's classic novel paired with some seriously dapper rodents." - EW.com, on A GUINEA PIG PRIDE & PREJUDICE

"This may be the definitive version of Pride and Prejudice. If they could get War and Peace down to this length, it would be a service to mankind." - Salman Rushdie, on A GUINEA PIG PRIDE & PREJUDICE

"An entirely new, adorably hilarious take on the classic story . . . This affectionate, quietly dramatic homage is the perfect gift for Austen-philes, Austen-newbies, guinea-pig aficionados and anyone who appreciates a tale well told." - BookPage, on A GUINEA PIG PRIDE & PREJUDICE