Sir Bentley and Holbrook Court (The Knights of Arrethtrae #2) (Paperback) 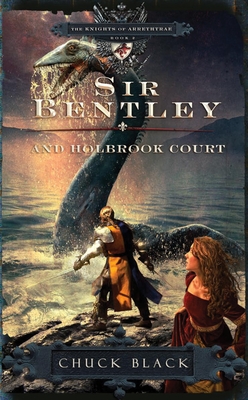 By Chuck Black
$9.99
Email or call for price

Sir Bentley, an honorable young knight, abandons his calling in order to seek the truth of the Prince. Choosing to live as the Prince did, he forsakes his former lifestyle and wealth to live as a pauper. His travels take him to Holbrook, where the townsfolk live in poverty, paying high taxes to support the lavish lifestyle of Lord Kingsley and his court. But something even darker is lurking in the shadows of the beautiful castle.

Bentley soon befriends Eirwyn, a mysterious but compassionate young woman who often distributes food among the poor. When Eirwyn is kidnapped by a ruthless tribe to serve as a sacrifice, Bentley battles a vicious mountain creature to save her life. But when he discovers who is really behind Holbrook’s downfall, he’s faced with an even bigger challenge–battling the Dark Knight’s most evil commander and his Shadow Warriors as they attack the castle.

Will greed destroy the kingdom the way it destroyed Lord Kingsley? Or can Sir Bentley and Eirwyn work together to restore order and prosperity to the kingdom through the compassion and grace of the Prince?

Journey to Arrethtrae, where these knights of noble heart live and die in loyal service to the King and the Prince. These knights are mighty, for they serve a mighty King. They are…the Knights of Arrethtrae!

Chuck Black, a former F-16 fighter pilot and tactical communications engineer, is the author of eight novels, including the popular Kingdom series. He has received praise from parents across the country for his unique approach to telling biblical truths. His passion in life is to serve the Lord Jesus Christ and to love his wife, Andrea, and their six children. He lives with his family in North Dakota.

“With sanctified imagination, Chuck Black transports readers back to the days of chivalry and valor, clashing steel, and noble conflict–but ultimately he transports readers to the eternal triumph of the King who reigns!”
– Douglas Bond, author of HOLD FAST In a Broken World, and Guns of the Lion

“Chuck Black is a word crafter who is able to weave Kingdom principles into the fabric of one’s moral imagination. The characters he has created and the passions they exude, will motivate readers to follow their examples, which have now been etched into their awakened conscience.”
– Mark Hamby, Founder and President of Cornerstone Family Ministries and Lamplighter Publishing

“My son, Nathan, loved the first book in this series and he said the second was even better. In my son's own words, ‘Mom, it was exciting and full of mystery. It compelled me to read more. I couldn't put it down.’ As a mom and an author, I give Sir Bentley and Holbrook Court two thumbs up!”
– Tricia Goyer, homeschooling mom and author of eighteen books, including Generation NeXt Parenting

Praise for The Knights of Arrethtrae series
“Chuck Black is a master storyteller. The fourteenth-century feel of his books is wholly captivating. Sir Kendrick and the Castle of Bel Lione is no exception. Yet the principle anchors of the story–faithfulness, friendship, loyalty, redemption, and forgiveness–are what make it fully worthwhile. Expect to see very little of your young knight after he gets ahold of this book. He will more than likely emerge from the pages with an intensified determination to fight the battles in his own life as a faithful Knight of the Prince.”
–Jennifer Igarashi, freelance writer, homeschool-resource reviewer, and mother of an eleven-year-old Kingdom series fanatic

“Chuck Black has once again transported his readers to the time of knights, castles, and damsels in distress. The Kingdom series was such an enjoyable read that I was surprised to find Sir Kendrick and the Castle of Bel Lione even more delightful…I was drawn into the tale and cared almost immediately for the characters. I rejoiced in each victory, wept with each failing and loss. Chuck is clearly maturing in his skills, and I look forward with great anticipation to his forthcoming works.”
–Gail Biby, publications editor for the North Dakota Home School Association and author of North
Dakota Guide to Home School High School

“Chuck Black is the John Bunyan for our times! Sir Kendrick and the Castle of Bel Lione is a reminder of the origins of the spiritual warfare we are to fight daily.”
–Iaci Flanders, inductive Bible study teacher and homeschool mom