Life on the Mississippi: An Epic American Adventure (Paperback) 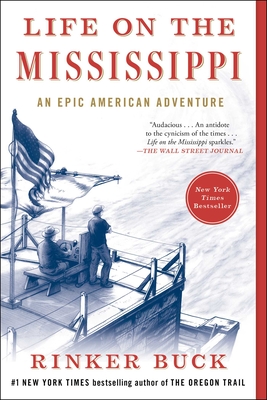 The eagerly awaited return of master American storyteller Rinker Buck, Life on the Mississippi is an epic, enchanting blend of history and adventure in which Buck builds a wooden flatboat from the grand “flatboat era” of the 1800s and sails it down the Mississippi River, illuminating the forgotten past of America’s first western frontier.

Seven years ago, readers around the country fell in love with a singular American voice: Rinker Buck, whose infectious curiosity about history launched him across the West in a covered wagon pulled by mules and propelled his book about the trip, The Oregon Trail, to ten weeks on the New York Times bestseller list. Now, Buck returns to chronicle his latest incredible adventure: building a wooden flatboat from the bygone era of the early 1800s and journeying down the Mississippi River to New Orleans.

A modern-day Huck Finn, Buck casts off down the river on the flatboat Patience accompanied by an eccentric crew of daring shipmates. Over the course of his voyage, Buck steers his fragile wooden craft through narrow channels dominated by massive cargo barges, rescues his first mate gone overboard, sails blindly through fog, breaks his ribs not once but twice, and camps every night on sandbars, remote islands, and steep levees. As he charts his own journey, he also delivers a richly satisfying work of history that brings to life a lost era.

The role of the flatboat in our country’s evolution is far more significant than most Americans realize. Between 1800 and 1840, millions of farmers, merchants, and teenage adventurers embarked from states like Pennsylvania and Virginia on flatboats headed beyond the Appalachians to Kentucky, Mississippi, and Louisiana. Settler families repurposed the wood from their boats to build their first cabins in the wilderness; cargo boats were broken apart and sold to build the boomtowns along the water route. Joining the river traffic were floating brothels, called “gun boats”; “smithy boats” for blacksmiths; even “whiskey boats” for alcohol. In the present day, America’s inland rivers are a superhighway dominated by leviathan barges—carrying $80 billion of cargo annually—all descended from flatboats like the ramshackle Patience.

As a historian, Buck resurrects the era’s adventurous spirit, but he also challenges familiar myths about American expansion, confronting the bloody truth behind settlers’ push for land and wealth. The Indian Removal Act of 1830 forced more than 125,000 members of the Cherokee, Choctaw, and several other tribes to travel the Mississippi on a brutal journey en route to the barrens of Oklahoma. Simultaneously, almost a million enslaved African Americans were carried in flatboats and marched by foot 1,000 miles over the Appalachians to the cotton and cane fields of Arkansas, Mississippi, and Louisiana, birthing the term “sold down the river.” Buck portrays this watershed era of American expansion as it was really lived.

With a rare narrative power that blends stirring adventure with absorbing untold history, Life on the Mississippi is a mus­cular and majestic feat of storytelling from a writer who may be the closest that we have today to Mark Twain.

Rinker Buck began his career in journalism at the Berkshire Eagle and was a longtime staff writer for the Hartford Courant. He has written for Vanity Fair, New York, Life, and many other publications, and his work has won the PEN New England Award, the Eugene S. Pulliam National Journalism Writing Award, and the Society of Professional Journalists Sigma Delta Chi Award. He is the New York Times bestselling author of The Oregon Trail, Flight of Passage, and First Job. He lives in Tennessee.

“Audacious . . . Compelling . . . An antidote to the cynicism of the times . . . Life on the Mississippi sparkles. . . . His prose, like the river itself, has turns that quicken the pulse.”
—Wall Street Journal

“An invigorating blend of history and journalism informs this journey down Old Man River. . . . Besides being a willing and intrepid traveler, Buck is also an able interpreter of history, and it’s clear that he’s devoured a library of Mississippiana. It all makes for an entertaining journey in the manner of William Least Heat-Moon, John McPhee, and other traveler-explainers. For armchair-travel aficionados and frontier-history buffs, it doesn’t get much better.”
—Kirkus Reviews (starred review)

“Engaging . . . [Buck is] a travel writer who delights in incongruity and in history’s rhymes.”
—New York Times

“A rich mix of history, reporting, and personal introspection . . . I see Buck at the helm of the Patience when I read Twain’s description of a riverboat captain: ‘A pilot, in those days, was the only unfettered and entirely independent human being that lived on the earth.’”
—St. Louis Post-Distpatch

“Rinker Buck seems like a guy you could sit down and have a beer and a good chat with. . . . The simplest conversation quickly turns into a master class of storytelling in short form. . . . Life on the Mississippi [is] an epic tale told with wit, wisdom and heart-touching honesty. . . . What the book will certainly do is give readers an up-close look at the waters so few of us see.”
—Gulf Coast Media

“Captivating . . . Rough-edged, well informed, and honest about his own blind spots, Buck is a winning tour guide. American history buffs and armchair adventurers will relish the trip.”
—Publishers Weekly

“[A] riveting, revealing, and often side-splitting saga that Oregon Trail fans would expect it to be. . . . Rollicking good reading.”
—New York Journal of Books

“Buck’s ability to deftly balance the intimate and the epic, along with his pervading charm and literary panache, make Life on the Mississippi an entertaining and engrossing read. . . . The book’s most poignant aspect is achieved thanks to the author’s ability to sketch brief, affecting portraits of the people with whom his voyage brings him into contact.”
—Shelf Awareness

“Both a travelogue and an engaging history lesson about America’s westward expansion after the Revolutionary War . . .  It’s a mark of Buck’s ability to write engagingly of his journey that many readers will conclude that a trip down the Mississippi would be a romantic adventure and a wonderful chance to learn about America’s history.”
—Christian Science Monitor