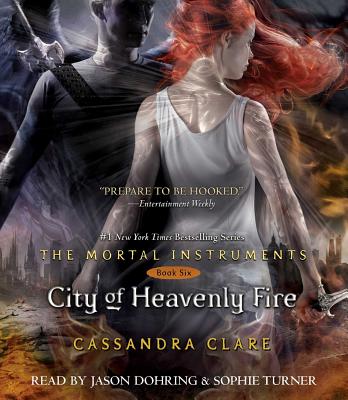 By Cassandra Clare, Jason Dohring (Read by), Sophie Turner (Read by)
$49.99
Email or call for price

Shadowhunters and demons square off for the final showdown in the spellbinding, seductive conclusion to the #1 New York Times bestselling Mortal Instruments series—now with a gorgeous new cover, a map, a new foreword, and exclusive bonus content! City of Heavenly Fire is a Shadowhunters novel.

Darkness has descended on the Shadowhunter world. Chaos and destruction overwhelm the Nephilim as Clary, Jace, Simon, and their friends band together to fight the greatest evil they have ever faced: Clary’s own brother. Sebastian Morgenstern is on the move, systematically turning Shadowhunter against Shadowhunter. Bearing the Infernal Cup, he transforms Shadowhunters into creatures of nightmare, tearing apart families and lovers as the ranks of his Endarkened army swell. Nothing in this world can defeat Sebastian—but if they journey to the realm of demons, they just might have a chance…

Lives will be lost, love sacrificed, and the whole world will change. Who will survive the explosive sixth and final installment of the Mortal Instruments series?

Cassandra Clare is the author of the #1 New York Times, USA TODAY, Wall Street Journal, and Publishers Weekly bestselling Shadowhunter Chronicles. She is also the coauthor of the bestselling fantasy series Magisterium with Holly Black. The Shadowhunter Chronicles have been adapted as both a major motion picture and a television series. Her books have more than fifty million copies in print worldwide and have been translated into more than thirty-five languages. Cassandra lives in western Massachusetts with her husband and three fearsome cats. Visit her at CassandraClare.com. Learn more about the world of the Shadowhunters at Shadowhunters.com.