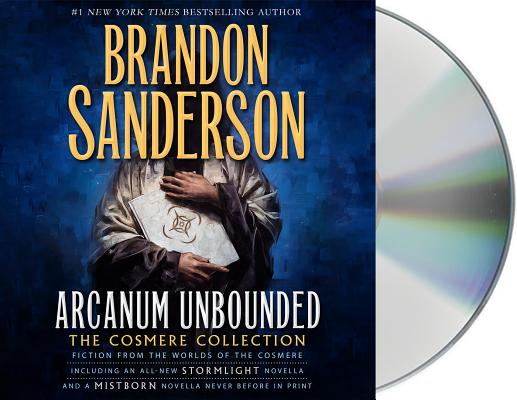 By Brandon Sanderson, Michael Kramer (Read by), Kate Reading (Read by)
$69.99
Email or call for price

The collection will include nine works in all. The first eight are:

“The Hope of Elantris” (Elantris)
“The Eleventh Metal” (Mistborn)
“The Emperor's Soul” (Elantris)
“Allomancer Jak and the Pits of Eltania, Episodes 28 through 30” (Mistborn)
“White Sand" (excerpt; Taldain)
"Shadows for Silence in the Forests of Hell” (Threnody)
“Sixth of Dusk” (First of the Sun)
“Mistborn: Secret History” (Mistborn)

These wonderful works, originally published on Tor.com and elsewhere individually, convey the expanse of the Cosmere and tell exciting tales of adventure Sanderson fans have come to expect, including the Hugo Award-winning novella, “The Emperor's Soul” and an excerpt from the graphic novel "White Sand."

Arcanum Unbounded also contains the Stormlight Archive novella "Edgedancer," which appears in this audiobook for the first time anywhere. It is a story of Lift, taking place between Words of Radiance and the forthcoming Oathbringer.


Other Tor books by Brandon Sanderson

The Mistborn trilogy
Mistborn: The Final Empire
The Well of Ascension
The Hero of Ages

Mistborn: The Wax and Wayne series
Alloy of Law
Shadows of Self
Bands of Mourning

Other books by Brandon Sanderson

Brandon Sanderson grew up in Lincoln, Nebraska. He lives in Utah with his wife and children and teaches creative writing at Brigham Young University. He is the author of such bestsellers as the Mistborn® trilogy and its sequels, The Alloy of Law, Shadows of Self, and The Bands of Mourning; the Stormlight Archive novels The Way of Kings and Words of Radiance; and other novels, including The Rithmatist and Steelheart. In 2013, he won a Hugo Award for Best Novella for The Emperor's Soul, set in the world of his acclaimed first novel, Elantris. Additionally, he was chosen to complete Robert Jordan's Wheel of Time® sequence.

Michael Kramer has narrated over 100 audiobooks for many bestselling authors. He read all of Robert Jordan’s epic Wheel of Time fantasy-adventure series as well as Brandon Sanderson’s The Stormlight Archive series. He received AudioFile magazine's Earphones Award for the Kent Family series by John Jakes and for Alan Fulsom's The Day After Tomorrow. Known for his “spot-on character portraits and accents, and his resonant, well-tempered voice” (AudioFile), his work includes recording books for the Library of Congress’s Talking Books program for the blind and physically handicapped.

Kramer also works as an actor in the Washington, D.C. area, where he lives with his wife, Jennifer Mendenhall (a.k.a. Kate Reading), and their two children. He has appeared as Lord Rivers in Richard III at The Shakespeare Theatre, Howie/Merlin in The Kennedy Center’s production of The Light of Excalibur, Sam Riggs and Frederick Savage in Woody Allen’s Central Park West/Riverside Drive, and Dr. Qari Shah in Tony Kushner’s Homebody/Kabul at Theatre J.

Kate Reading is the recipient of multiple AudioFile Earphones Awards and has been named by AudioFile magazine as a “Voice of the Century,” as well as the Best Voice in Science Fiction & Fantasy in 2008 and 2009 and Best Voice in Biography & Culture in 2010. She has narrated works by such authors as Jane Austen, Robert Jordan, Edith Wharton, and Sophie Kinsella. Reading has performed at numerous theaters in Washington D.C. and received a Helen Hayes Award for her performance in Aunt Dan and Lemon. AudioFile magazine reports that, "With subtle control of characters and sense of pacing, Kate’s performances are a consistent pleasure."