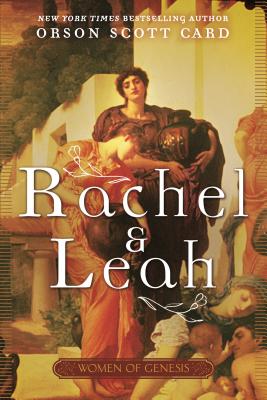 Tracing their lives from childhood to maturity, Card shows how the women of Genesis change each other—and are changed again by the holy books that Jacob brings with him.

Leah, the oldest daughter of Laban, whose "tender eyes" prevent her from fully participating in the daily work of her nomadic family, and Rachel, the spoiled younger daughter, the petted and privileged beauty of the family—or so it seems to Leah.

There is also Bilhah, an orphan who is not quite a slave but not really a family member, a young woman desperately searching to fit in, and Zilpah, who knows only how to use her beauty to manipulate men as she strives to secure for herself something better than the life of drudgery and servitude into which she has been born.

Into the desert camp comes Jacob, a handsome and charismatic kinsman who is clearly destined to be Rachel's husband. But that doesn't prevent the other women from vying for his attention.

Ambition, jealousy, fear, and love motivate them as they vie for the attention of Jacob, heir to the spiritual birthright of Abraham and Isaac.

Orson Scott Card is best known for his science fiction novel Ender's Game and its many sequels that expand the Ender Universe into the far future and the near past. Those books are organized into the Ender Quintet, the five books that chronicle the life of Ender Wiggin; the Shadow Series, which follows on the novel Ender's Shadow and are set on Earth; and the Formic Wars series, written with co-author Aaron Johnston, which tells of the terrible first contact between humans and the alien "Buggers." Card has been a working writer since the 1970s. Beginning with dozens of plays and musical comedies produced in the 1960s and 70s, Card's first published fiction appeared in 1977--the short story "Gert Fram" in the July issue of The Ensign, and the novelette version of "Ender's Game" in the August issue of Analog. The novel-length version of Ender's Game, published in 1984 and continuously in print since then, became the basis of the 2013 film, starring Asa Butterfield, Harrison Ford, Ben Kingsley, Hailee Steinfeld, Viola Davis, and Abigail Breslin.

Card was born in Washington state, and grew up in California, Arizona, and Utah. He served a mission for the LDS Church in Brazil in the early 1970s. Besides his writing, he runs occasional writers' workshops and directs plays. He frequently teaches writing and literature courses at Southern Virginia University.

He is the author many science fiction and fantasy novels, including the American frontier fantasy series "The Tales of Alvin Maker" (beginning with Seventh Son), and stand-alone novels like Pastwatch and Hart's Hope. He has collaborated with his daughter Emily Card on a manga series, Laddertop. He has also written contemporary thrillers like Empire and historical novels like the monumental Saints and the religious novels Sarah and Rachel and Leah. Card's work also includes the Mithermages books (Lost Gate, Gate Thief), contemporary magical fantasy for readers both young and old.

Card lives in Greensboro, North Carolina, with his wife, Kristine Allen Card. He and Kristine are the parents of five children and several grandchildren.

"This series is definitely for those interested in women in the Bible, and in such novels as The Red Tent (by NYT bestseller Anita Diamant)." —Kliatt

“The story moves swiftly, climaxing at several points, such as Abram and Sarai’s stay in Egypt when the pharaoh wants to take Sarai as his wife. It is a quick and interesting read….This is an intriguing story .”—Pittsburg Post-Gazette

“This is an inventive and engaging telling of the life of Sarah, the woman who laughed at God’s news (that so old a woman would now bear a child)—and who gives as good as she gets throughout both the book of Genesis and Card’s novel.” —Historical Novel Society