Mark of the Grizzly: Revised and Updated with More Stories of Recent Bear Attacks and the Hard Lessons Learned (Paperback) 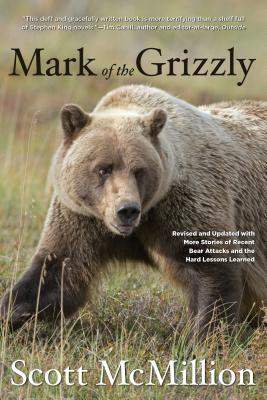 A must-read about these magnificent but sometimes deadly creatures-thoroughly revised, expanded, and updated.

Scott McMillion has been an award-winning journalist and author for more than 20 years. He is the author of Mark of the Grizzly, now in its 13th printing, and has been senior editor of the critically acclaimed Montana Quarterly for the past five years. McMillion has been writing about environmental issues, including grizzly bears, for more than 20 years. His byline has appeared in newspapers and magazines around the nation and his essays have been collected in several books. His award-winning journalism has been cited in hundreds of popular and scientific articles and books. McMillion is well connected with journalists around the nation. He has been a featured essayist on PBS' The News Hour with Jim Lehrer and he has been interviewed many times on television and radio programs. As a veteran investigative journalist, McMillion understands how to ferret out the depths of a story, then bring it home to readers.

From Montana Magazine, January/February, 2012:Nature teaches us many lessons. For those of us lucky enough to live in Montana, we live in a wide-open, ever changing classroom. As the tango between humans and grizzly bears intensifies, we need to be reminded of how our decisions affect these great creatures. That’s why it’s important that writers like Scott McMillion have taken the time to chronicle bear encounters, old and new.If nature is our classroom, then McMillion’s recently updated book, Mark of the Grizzly, should be on the syllabus as required reading. From The Helena, Montana Independent Record Dec. 18, 2011:Scott McMillion…likes to write up a good story when he hears one. He did that in “Mark of the Grizzly,” which was first released in 1998 and sold more than 100,000 copies. It’s a compendium of stories of grizzly encounters, which author Tim Cahill said is “more terrifying than a shelf full of Stephen King novels.”Yet since the book’s debut, the use of DNA has revolutionized not just the study of bears but also the way attacks are investigated. And with the four unusual and deadly encounters in the past year near Yellowstone National Park alone, McMillion felt compelled to update the book, which has been re-released by Lyons Press.It’s a page-turner from the first sentence of the first chapter. From the Great Falls Tribune Dec. 21, 2011:In 1998, “Mark of the Grizzly” left its mark on me. Scott McMillion’s straightforward and matter-of-fact recounting of encounters between humans and grizzly bears made it an unforgettable book.Now, McMillion has revisited his book to update some of the chapters and add some new ones. The result is an even more gripping “Mark of the Grizzly.” From the Bozeman Daily Chronicle, Jan. 5, 2012:Scott McMillion recalls interviewing a veterinarian lying in the Jackson, Wyo. Hospital, who’d just survived a grizzly bear attack. The man got a little tearful as he said, “Your book saved my life.”McMillion, author of “Mark of the Grizzly,” downplayed his contribution, saying the credit for saving Tom Crosson in 2002 should go to his fast-thinking companion, who sprayed the bear with pepper spray to make it turn tail and run.Still, it was reading McMillion’s riveting stories about grizzly attacks “and the hard lessons learned,” that prompted the two friends to buy bear spray before venturing into Yellowstone’s backcountry.Thirteen years after “Mark of the Grizzly was first published in 1998, after 16 printings and selling roughly 100,000 copies, McMillion has updated the book to include new hair-raising stories of bear attacks, why they happen, why some people survive to tell the tale and others don’t. From National Parks Traveler Dec. 20, 2011:Bear attacks horrify us, and yet they also, in a morbid way, fascinate many. They are evidence that even in today’s modern world, tragic confrontations with nature do occur and, in the case of bears, demonstrate that man in not always the apex predator.“Mark of the Grizzly” is not a book for the faint of heart, nor for those filled with trepidation at the thought of leaving a parking lot in Yellowstone, Grand Teton, or Glacier. But it’s a powerful book if you’re trying to better understand how attacks happen, and what safeguards you can take to protect yourself against bear attacks.” From The Missoulian, Nov. 23, 2011:It’s easier to get hit by lightning than to be attacked by a grizzly bear.So Livingston author Scott McMillion practically caught lightning in a bottle when he decided to update his book, “Mark of the Grizzly,” just before 2010 became Annus horribilis for Ursus arctos horribilis. McMcillion wrote the original book in 1998 to both peel back some of the myths surrounding grizzly bear attacks and pile up the lessons learned from actual encounters. The senior editor of Montana Quarterly and former Bozeman Daily Chronicle reporter researched incidents going back to 1977.“I want people to be safe out there,’ he said. “I think posting a dry list of what to do and don’t do at the trailhead isn’t that effective. A narrative is a better lesson for how to act around bears.”The books chapters recounted hunting mishaps, photographers who got too close and in-your-face encounters with bear spray. It also detailed the responses that may have saved a life or turned a bluff charge into a full-on smackdown. Each chapter had interviews with victims and rescuers, along with insights into bear behavior.Between then and now, the human side of the encounters has added several new twists. There are the folks McMillion calls “bear whisperers” like Timothy Treadwell, whose delusions about being able to live with Alaskan brown bear got him and his girlfriend killed, along with at least two of the bears he thought he was protecting. The growing popularity of long distance backcounry races and mountain biking have added new ways to surprise a bear into a confrontation.