The Silmarillion (Pre-Lord of the Rings) (Mass Market) 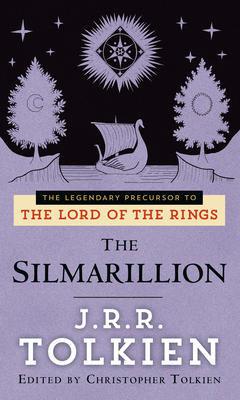 The legendary precursor to The Lord of the Rings

“A creation of singular beauty . . . magnificent in its best moments.”—The Washington Post

Set primarily in the First Age of Middle-earth, The Silmarillion contains the legend of the creation of the world and an account of the Elder Days. It is the ancient drama remembered by Elrond and Galadriel in The Lord of the Rings, and the harrowing origin of the adventure that ends ages later with Frodo and the One Ring.

At the story’s heart are the three Silmarils, jewels that held within them the Light of the Two Trees of Valinor, and Fëanor, the most gifted of elven artificers. When the Two Trees are destroyed, the Silmarils become coveted, setting into motion events that lead to the rebellion of Fëanor and his kindred against the gods, their exile from Valinor, and their hopeless war against the greatest enemy Middle-earth has ever known: Morgoth.

John Ronald Reuel Tolkien was born on January 3, 1892, in Bloemfontein, South Africa. After serving in World War I, he embarked upon a distinguished academic career and was recognized as one of the finest philologists in the world. He was a professor of Anglo-Saxon at Oxford, a fellow of Pembroke College, and a fellow of Merton College until his retirement in 1959. He is, however, beloved throughout the world as the creator of Middle-earth and author of such classic works as The Hobbit and The Lord of the Rings. He died on September 2, 1973, at the age of eighty-one.

“Essential reading for Tolkien lovers and an important book.”—Baltimore Sun

“A creation of singular beauty . . . magnificent in its best moments.”—The Washington Post

“The tale of Middle-earth before and during the coming of the humans . . . richly filled with magic, heroic deed, and wonderful resonant names . . . a fantastic book in every sense of the word.”—The Seattle Times