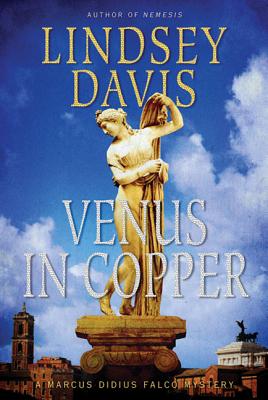 Rome, AD 71. Marcus Didius Falco is deperate to leave the notorious Lautumiae prison - though being bailed out by his mother is a slight indignity...

Things go from bad to worse though when a group of nouveau riche ex-slaves hire him to outwit a fortune-hunting redhead, whose husbands have a habit of dying accidently, leaving him up against a female contortionist, her extra-friendly snake, indigestible cakes and rent racketeers. And, all the while, trying to lure Helena Justina to live with him, a dangerous proposition given the notorius instability of Roman real estate. In a case of murder as complicated as he ever faced, this Lindsey Davis' classic tale Venus in Copper shows Falco at his very finest.

“Falco's good-humored but intelligent narration provides a fascinating and authentic re-creation of a Rome bustling with activity... A wonderful escape.” —Library Journal

“Intriguing characters abound in this skillfully written, Chandleresque mystery that gives readers a peek at the seamy side of life in first-century Rome.” —School Library Journal