Mind of the Raven: Investigations and Adventures with Wolf-Birds (Hardcover) 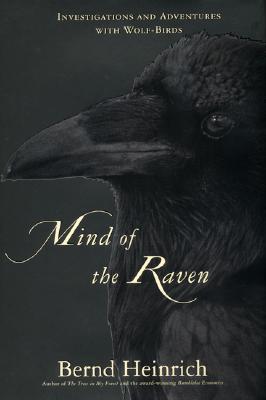 By Bernd Heinrich
$25.00
Email or call for price

In Mind of the Raven, Bernd Heinrich, award - winning naturalist, finds himself dreaming of ravens and decides he must get to the truth about this animal reputed to be so intelligent.

Much like a sleuth, Heinrich involves us in his quest, letting one clue lead to the next. But as animals can only be spied on by getting quite close Heinrich adopts ravens, thereby becoming a "raven father," as well as observing them in their natural habitat, studying their daily routines, and in the process painting a vivid picture of the world as lived by the ravens. At the heart of this book are Heinrich's love and respect for these complex and engaging creatures, and through his keen observation andanalysis, we become their intimates too.

Throughout history there has existed an extraordinary relationship between humans and ravens. Ravens, like early humans, are scavengers on the kills of great carnivores. As scavengers, ravens were associated with hunters they found in the north: wolves and, later, men. The trinity of wolf, man, and raven in the hunt is an extremely ancient one. In considering the appeal of the raven, Bernd Heinrich suspects that a meeting of the minds might reside in that hunting trinity.

Heinrich's passion for ravens has led him around the world in his research. Mind of the Raven takes you on an exotic journey--from New England to Germany, Montana to Baffin Island in the high Arctic--offering dazzling accounts of how science works in the field, filtered through the eyes of a passionate observer of nature.

Heinrich has a true gift; through his stories, his beautiful writing, illustrations, and photography, the ravens come alive. Each new discovery and insight into their behavior is thrilling to read. just as the title promises, the reader is given a rare glimpse into the mind of these wonderful creatures.

Following the dictum of Leonardo da Vinci--"It is not enough to believe what you see. YOU Must also understand what you see"--Bernd Heinrich enables us to see the natural world through the eyes of a scientist. At once lyrical and scientific, Mind of the Raven is bound to be a modern classic.

The author of numerous bestselling and award-winning books, Bernd Heinrich is a professor of biology at the University of Vermont. He divides his time between Vermont and the forests of western Maine.

“Bernd Heinrich is one of the finest living examples of that strange hybrid: the science writer.”
— Los Angeles Times Book Review

“A compelling exploration of the nature of consciousness with an unremittingly delicious jaunt in the woods.... a grand storyteller.”
— Baltimore Sun